The last four remaining Toronto Community Housing board members were removed by the city in a vote 25-18 around midnight on Wednesday night/Thursday morning.
In the interim one person will act as the managing director and while his name remains confidential for now it’s been widely reported as former deputy mayor Case Ootes. To read the many motions and how councillors voted, click here.
I filed my story for the  Town Crier at noon today detailing some of the next steps and concerns some councillors have over the process of removing a board that was not found to be implicated in any wrongdoing.
When that story is edited, I will post it on m blog.
The full story is done now and can be read here.

Council has been debating for three plus hours now on Mayor Rob Ford’s request that the last four board members of Toronto Community Housing be removed tonight. He wants them replaced tonight by an interim managing director – Case Ootes.
Read the mayor’s letter to council on what he is seeking.
While there are a number of motions be city councillor being debated now (9pm), the main issue comes down to this: the mayor’s request the last four board members councillors Maria Augimeri and Raymind Cho and the two tenant reps Catherine Wilkinson and Dan King be removed as they refuse to step down. Mayor Ford wants those four replaced by one person, former councillor Case Ootes, as the interim managing director.
And the main alternative being debated  tonight is Councillor Kristyn Wong-Tam’s motion that the four current reps stay on the board and the interim managing director be added but that he not be paid because as an ex councillor Ootes is already getting severance.
See all the councillors’ motions here.
The debate and media scrum didn’t end until almost 12:30 am Thurs March 10. Here’s the update on the results. 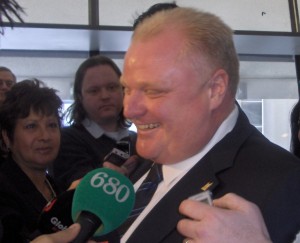 The good news is that city approved its 2011 operating budget today with a tax freeze.
However, the 2012 budget is already shaping up to be one that will involve hikes in TTC fares and property taxes and selling off city assets to fix the projected $774 million hole for next year’s budget.
But that’s a worry for another day.
Mayor Rob Ford was beaming after the passage of the first operating budget of his administration.
“This is a great day for the taxpayers of the city. For the first time in 11 years we passed a zero percent tax increase,” Ford told the media. “We campaigned hard and definitely slowed down the gravy train.”
Ford said not only did he attend the four public meetings on the budget with hundreds of deputations, but personally returns calls from Torontonians regarding their priorities.
“If you talk to the citizens out there, I am sure 99 percent of them are happy at not having to pay higher taxes,” he said.
The city passed the $9.381 billion gross budget with few amendments.
Councillor John Filion that did get one through with a 44-1 vote to increase the Toronto Public Health Budget with one-time provincial funding of $100,000. This money from the provincial Ministry of Health and Long Term Care is earmarked for a communication strategy to encourage HIV and Syphilis screening.
Mayor Ford was the only one to vote against this provincial money.
“Everyone says it’s provincial money. No it’s taxpayers’ money,” Ford explained his vote to the media.

END_OF_DOCUMENT_TOKEN_TO_BE_REPLACED

About 9:45 pm tonight the TTC voted to reduce hours on 41 routes and use that money to increase service on other routes. Here’s a link to a full list of reduced hours on 41 routes buses starting May 8. The TTC has not announced where service will be increased.
I will file a full story on this tomorrow, Feb. 3.
As promised, here is that UPDATE.

Mayor Rob Ford got his first win today as council voted 39-6 to scrap the vehicle registration tax as of Jan. 1.
“It’s a great day for the taxpayers of Toronto,” he said in a media scrum Thursday afternoon. “We just put $64 million back into their pockets and they can do what they want. They can create jobs and stimulate the economy or they can save it.”
“I’m glad we finally got rid of it and I look forward to saving the taxpayers more money in the next four years,” he said. “I just want to bring back respect for taxpayers at city hall.”
It will cost the city $64 million to repeal the tax, $48 million in lost annual revenue plus $12 million for refunds for car owners who paid their 2011 tax in advance. The city doesn’t yet know how it will make up the revenue, but that will be dealt with during the budget process.

END_OF_DOCUMENT_TOKEN_TO_BE_REPLACED

No incumbent, nine candidates compete for vote
Seat up for grabs in competitive race
Kris Scheuer

It’s eleven days until election day. And I am still an undecided voter for mayor, trustee and council candidates in my Ward 19. As a political reporter who interviews candidates, writes city hall stories and pleads with people to be informed voters: I need to take my own advice.
In the past, I have had the advantage of interviewing candidates in elections in the different downtown Toronto ridings and wards I have lived in.
Or my colleagues have done stories on the local candidates where I reside, so that’s always helped me stay on top of issues, who is running and what they stand for.
This election, the Town Crier where I work has been heavily covering the election since last year even before candidates started officially registering Jan. 4. But we are not covering Ward 19. So I am on my own.
Besides reading campaignmaterial and dropping by the offices of local candidates in my neighbourhood, I am attending a Ward 19 debate tonight.
I hope to become better informed.
I will let you know tomorrow (Fri Oct 15) my thoughts on the registered candidates for this Trinity-Spadina Ward 19: David (Ted) Footman, Mike Layton, Jim Likourezos, Sean McCormick, Karlene Nation, George Sawision, Jason Stevens, Karen Sun and Rosario Bruto (email: rossbruto@hotmail.com).

Mayor jokes about running again as nominations close
Sept 10 last day for candidates to sign up in this election
Kris Scheuer
(Written for Town Crier Sept. 10)

Mayor David Miller strolled into the city council chambers about 10 minutes before 2 p.m. nomination deadline waiving $200 in his hand.
Was Miller going to change his mind and register at the last possible moment for the job he’s held for two terms?
No, he was just having a bit of fun with the media who were gathered to see the final tally of who is running for the top job, council seats and various school boards.
However, Miller did use the opportunity to urge Torontonians to get out and vote on Oct. 25.
“Vote for … A city that welcomes everyone from around the world and builds for the future,” he said. “That is the kind of Toronto I want my children to grow up in and that’s the kind of Toronto that the vast majority of Torontonians want to see.” END_OF_DOCUMENT_TOKEN_TO_BE_REPLACED

As I reported July 8, the east end public school could get a $25,000 sports facility upgrade if enough people vote to put it in the top ten.
All ten finalist (out of 20 remaining) in the Kraft Celebration Tour contest will each win a $25,000 upgrade.
Today from noon until tomorrow July 14 at 11:59 am Sloane PS faces off online against Port Dover Sports Complex. The top ten winners are also all part of a 10-day TSN sports broadcast tour of their communities.
Vote for Victoria Village’s Sloane PS now by clicking here.

The Victoria Village community and Sloane Public School have a good chance of winning $25,000 for upgrades to a local sports facility.
But it won’t happen without your help.
Read the school’s pitch right here.
The high-needs community is the only Toronto location remaining in the top 20 to host this year’s Kraft Celebration Tour and receive prize money.
The tour sees Kraft delivering cash and TSN hitting the road to visit 10 Canadian communities.
There are currently 20 finalists paired in 10 groups of two.
Sloane PS put in the application, and would use the $25,000 to help build a track for use by both the 260 students who attend the school and the local community.
Between July 13 at noon until 11:59 pm July 14, Victoria Village, represented by Sloane Public School, will face off against Port Dover. The community with the most votes on that particular day will win. END_OF_DOCUMENT_TOKEN_TO_BE_REPLACED

TDSB to vote on closing sites to get revenue to reinvest in schools across Toronto. Town Crier file photo.

The school board has some vital votes tonight on whether to keep eight public schools open.
Board staff and a local Accommodation Review Committee recommend Arlington close by September 2011 and J.R Wilcox, Cedarvale, Humewood and Rawlington all expand to grade eight to accommodate area students.
Briar Hill school
Another local ARC recommended closing Briar Hill PS and moving students to nearby school sites. A minority report by some committee members recommended putting a new JK to 3 school at the site, which could be redeveloped with a residential building.
That was supposed to come to the school board June 23, but instead a decision’s been postponed to allow time to explore the options.
No decision have been made yet regarding selling the site, redevelopment or closing the school, but staff has been asked to look at how much it would cost to build a new Briar Hill school on-site if the lot was redeveloped. END_OF_DOCUMENT_TOKEN_TO_BE_REPLACED