These homes will be demolished to pave way for at least 60 condo units on Kippendavie Ave. Photo by Francis Crescia/Town Crier file photo.

The city approved a settlement for the Beach development at 66-76 Kippendavie Avenue.
Developer Worsley Urban Partners first proposed the condo project in 2009 but due to council’s lack of a decision in a timely matter, the developer appealed directly to the Ontario Municipal Board.
So this new settlement was an 11th hour deal considering 1 board pre-hearing looming April 19.
The city, Kew Beach Neighbourhood Association, Toronto District School Board and the developer met with a city-funded mediator on April 6 and came away with a settlement, which was approved by council without debate on April 12.
Beach Councillor Mary-Margaret McMahon said that all parties compromised to reach this agreement.
“I am happy everyone can get on with their lives and have worked really hard especially the community,” she said hours April 12 vote to approve the project. “But I am worried about the size and the (area basement) flooding.”

END_OF_DOCUMENT_TOKEN_TO_BE_REPLACED

Despite months of deferrals and a six hour debate, Toronto and East York Community Council still didn’t make a decision on a controversial condo proposal at 66 to 76 Kippendavie Avenue. It voted instead to refer the issue to city council without recommendation.
Leading up to the vote, it was unclear what would happen as council members had differing views on the project. Chair Gord Perks wanted to take city staff’s advice and approve the 65 unit project while Beach rep Mary-Margaret McMahon recommended rejecting it.
In the end, the body followed Councillor Janet Davis’s advice to punt the ball to April 12 city council meeting. But time is not on the city’s side as an Ontario Municipal Board hearing on the project has been scheduled for April 19.
Following the advice of councillors Pam McConnell and Paula Fletcher the city will hire a third party mediator to work on reaching a settlement on the outstanding issues between the residents and the developer, including reducing the unit count to 54 and requiring $10 million in insurance to cover any impacts on adjacent homes during construction, before council meets. END_OF_DOCUMENT_TOKEN_TO_BE_REPLACED

A redevelopment on Kippendavie is heading to the OMB. Photo by Francis Crescia/Town Crier.

Beach residents, the city and Longo Development are frantically trying to work out a compromise on a Beach apartment proposal in advance of a scheduled Ontario Municipal Board hearing.
Councillor Mary-Margaret McMahon asked for a deferral when the controversial development proposal at 66 to 76 Kippendavie Ave. came before Toronto and East York Community Council on Feb. 16.
“We will work our tails off in the next few weeks to see what we can come up with,” McMahon said.
She would not take a position on what a suitable compromise would entail for a current proposal that would see six homes demolished to construct a four-storey, 65-unit apartment building.
The city has yet to rule on the proposal one way or another as it has been deferred on more than one occasion since last summer. The city’s planning department recommends approval of the application, which is heading to the Ontario Municipal Board for a June 13 hearing.

END_OF_DOCUMENT_TOKEN_TO_BE_REPLACED

The Toronto Parking Authority is set to make a major development deal near Bathurst and Eglinton and a popular Chinese food restaurant may be lost in the mix.
The city-owned parking authority plans to sell 935 Eglinton Ave. West, which is home to a 43-space surface lot that’s been around for over 50 years. Developer BSAR Eglinton wants to buy the site from the parking authority and build a condo, retail space and a new parking lot.
BSAR already entered into a conditional agreement with N. Kwinter Holdings and Harryetta Holdings to buy an adjacent site at 925 Eglinton Ave. West that’s home to China House restaurant, according to city documents.
The developer wants to consolidate the two sites and purpose a nine-storey condo with main floor retail and an underground parking lot, according to the report presented at a government management committee meeting on Jan. 31.
Councillor Joe Mihevc said there’s been no formal development application yet.

END_OF_DOCUMENT_TOKEN_TO_BE_REPLACED

Council’s made no decision, developer will try reach deal
But has appealed condo plan to Ontario Municipal Board just in case
Kris Scheuer
(Written for Town Crier Nov. 11.) 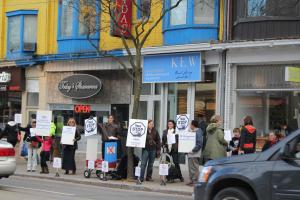 Residents protest outside Kippendavie pre-sales office for condos that have yet to be approved for development. Photo courtesy of Joanne Dicaire.

Beach residents are trying to halt a condo project until the city has a plan in place to fix residential water and sewage basement flooding.
Longo Development plans to tear down six existing homes and build a 65-unit, four-storey condo on Kippendavie Avenue.
The Beach has been prone to storm water and sewage basement flooding and some residents are concerned development intensification on their street will only exacerbate the problem.
The Kew Beach Neighbourhood Association organized a protest Nov. 6 and 7 when the developer started pre-sales of the yet to be approved condo project.
“We need more studies,” said Joanne Dicaire, chair of the group’s sewage and flooding committee.

END_OF_DOCUMENT_TOKEN_TO_BE_REPLACED

Ward 16 candidate Terry Mills may be giving Councillor Karen Stintz a political run for her money, but the incumbent still has the advantage in this race for Eglinton-Lawrence.
Mills, a professional planner with an architectural background is tapping into the key issue in this ward: development. Mills has the backing of Patrick Smyth, a member of the Avenue Road Eglinton Community Association. Smyth said he’s unimpressed with Stintz despite having supported her in 2003.
He’s specifically unhappy with Stintz’s decision to support two Riocan developments: A retirement residence at Avenue Road and Willowbank Boulevard, and Riocan’s plan to cover the open square at Yonge and Eglinton.
While Smyth claims Stintz hasn’t met a development she doesn’t like, her voting record shows otherwise.

END_OF_DOCUMENT_TOKEN_TO_BE_REPLACED

Six top mayoral candidates faced off on development, transit and city-building at the Toronto Board of Trade this morning.
John Tory moderated the debate that was hosted by the Urban Land Institute and attracted over 150 property owners, investors, developers, lawyers, architects, planners and engineers.
Less than 10 minutes into the debate came one of the first heated exchanges between mayoral candidates Rob Ford and George Smitherman seen as the frontrunners in recent polls.
“I can’t believe George Smitherman would have the nerve to come here and run for mayor of the city when he blew and squandered $1 billion when he was the health minister?” Ford said.
Smitheman retorted, “The allegations of $1 billion expediture on E-health counts the time when your father’s (Douglas) colleague Elizabeth Witmer was the minister of health in the province.”
Ford, “My dad passed away three year’s ago. Thanks.” END_OF_DOCUMENT_TOKEN_TO_BE_REPLACED

Six top Toronto mayoral contenders were on the hot seat at a debate on their vision to make the city more development and design-friendly.
The standing-room only June 16 event at the Art Gallery of Ontario preceded the annual PUG Awards for architectural excellence.
Mayoral candidate Rob Ford focused a lot on his skills as a businessman heading his late father’s company Deco Labels and his plan to save the city money by cutting expenses such as cutting council from 44 to 22 councillors.
But he got heckled more than once to answer the questions related to development and city planning.
Ford did mention there needs to be more public input on planning.
“I have had so many people frustrated at the process,” he said. “The residents don’t get listened to at all. I stick up for the little guy. There person who doesn’t have a voice at city hall.” END_OF_DOCUMENT_TOKEN_TO_BE_REPLACED

It may have take 12 years, but more parking spots are coming to the heart of Forest Hill Village.
And all without a new development.
The Toronto Parking Authority got council permission to spend over $1 million to add an additional 11 spaces to the  43-space surface lot at the corner of Thelma Avenue and Spadina Road.
This would require purchasing the property at 457 Spadina Road from Sharon and Fred Green for $898,000 plus another $255,000 for construction and associated costs.
The $1.15 million price tag would come from the Parking Authority’s revenues and the money would be recovered through future parking fees. If approved, the expansion would result in a total of 54 surface spaces at the lot.
“It’s a good opportunity,” said Lorne Persiko, vice president of real estate and development for the authority. “We are expanding the lot. We will do significant greening. It will be good for the area and they (residents) don’t have to deal with a development.”
He is referring to the storied history of this site that dates back at least a dozen years.