Ontario to pony up $8B for Scarborough, Eglinton LRTs
City to seek $4B private cash for Sheppard subway
T.O taxpayers on hook for $49 mil spent on canceled routes

Get ready Toronto for $12 billion worth of transit including a Sheppard subway, Eglinton LRT and the Scarborough LRT.
Mayor Rob Ford and Premier Dalton McGuinty announced the investment at a press conference from the Wilson TTC yards in front of brand new subways prototypes.
“This is a great day for taxpayers of Toronto,” Ford said. “They want rapid transit to get to work faster and to get home to their families.
“Our new plan will provide a truly rapid transit system.”
McGuinty confirmed that the province, through Metrolinx, would invest up to $8.4 million to build a 25 kilometre, 26 stop LRT line from Black Creek Drive to Kennedy station and north to Scarborough City Centre and to replace the existing Scarborough RT with an LRT.
The premier, mayor, the ministry of transportation and provincial agency-Metrolinx have worked tirelessly to work out a deal over the past four months that would meet the needs of all sides.
“Our provincial priority was the Eglinton line,” said Transportation Minister and Don Valley West MPP Kathleen Wynne. “We wanted to minimize delay, we wanted to get the Presto card implemented and we had said there was no more money.”

END_OF_DOCUMENT_TOKEN_TO_BE_REPLACED

The city and province are both climbing aboard a new transportation deal that will be unveiled tomorrow morning.
TTC chair Karen Stintz confirmed on March 30 that the provincial government, its transportation agency Metrolinx and the city are moving full steam ahead with the plan outlined by Mayor Rob Ford.
“We have an agreement that will see major transit expansion in the City of Toronto,” Stintz told the media at an impromptu press conference this afternoon. “It is a real win for both the city and the province and I am really excited about the announcement tomorrow.”
That announcement to take place at the TTC’s Wilson yards at 9 a.m. on March 31 will be to confirm the province is still committed to its original investment of about $8.4 billion.
The provincial cash will be spent on a fully underground and expanded Eglinton LRT and to turn the Scarborough RT into an above ground light rail transit route.

END_OF_DOCUMENT_TOKEN_TO_BE_REPLACED 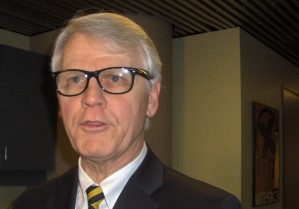 After months of speculation on his political future, veteran councillor Michael Walker announced today he is calling it quits after nearly three decades in municipal politics.
The St. Paul’s rep made his announcement at 11 a.m. in the press gallery at city hall.
“I am announcing my intention not to stand for re-election as city councillor,” said Walker, who turns 70 this June.
“I do this with mixed emotions,” he said, at times getting misty eyed. “I have been most fortunate and honoured to have represented the residents of Toronto for 28 years.
Over that period I have been privileged to serve the interests of astute, discerning and highly engaged constituency for which I was deeply grateful.”
“The time has come now for me to step aside from that role now, which I will dearly miss as most of you know,” he said. “I thank the people I have represented for the remarkable level of trust they have placed in me over the years.”
Although he sees himself as “her majesty’s royal opposition” to the mayors he’s worked with, Walker spoke fondly of Art Eggleton, June Rowlands, Barbara Hall, Mel Lastman and current mayor, David Miller. END_OF_DOCUMENT_TOKEN_TO_BE_REPLACED

Miller not stepping down or running again

Mayor Miller’s important announcement was on the budget
Speculation his press event was on his future, was false
By Kris Scheuer

I  was in the very packed, hot (temperature-wise) Mayor David Miller’s office this morning for his widely anticipated “important announcement”.
Because everyone associated with the press conference was so tight-lipped about the subject manner not even offering the topic, it was speculated Miller was going to say he was running for re-election OR stepping down sooner than the end of this term. Not so.
It was to announce the city has $100 million more (above the $250 million surplus) in revenues than perviously thought.
I will report back later with my story for the Town Crier newspaper. For now, read his speech for yourself for the details.

Will he step down earlier, step back in mayor’s race?
That’s current speculation on Miller’s press event March 10
I will be there and report more after “important announcement”
By Kris Scheuer
(Read update here.)

Tonight at 6:11 pm the city and Mayor David Miller’s office sent the media, including me, a vague head’s up he planned to make an important announcement. He will be speaking from his office at 9:30 am tomorrow and I will be there to report on it for the Town Crier newspaper.
Because his office and councillors are being so tight lipped about this announcement, the speculation is Miller will say something on his political future: either he will step down earlier to accept a new job or he’ll jump back into the 2010 Toronto mayor’s race. END_OF_DOCUMENT_TOKEN_TO_BE_REPLACED