Several residents refuse to believe Transit City is dead.
In December, days after Mayor Rob Ford announced that Transit City is no more, local activist Adam Chaleff-Freudenthaler organized a grassroots campaign in North Toronto to save Transit City, including the Eglinton light rapid transit line.
Chaleff-Freudenthaler took his “save Transit City” petition to the streets in North Toronto’s Ward 16. In December, he continued to canvass every ward affected by the Finch, Sheppard and Eglinton LRTs.
“The goal is to bring high quality, accurate information to people at their doors and communities,” he said.
On Dec. 1, the day he announced Transit City is dead, Ford met with TTC general manager Gary Webster and asked staff to look at costing of various underground options for transit including having the Eglinton LRT completely underground.
Webster will report back in January.
Councillor Karen Stintz, now the new TTC chair, has told the Town Crier on four occasions since the Oct. 25 election she expects light rapid transit along Eglinton to proceed underground.
“I expect when the plan is reviewed, that there won’t be any changes to Eglinton,” she said Dec. 10.

END_OF_DOCUMENT_TOKEN_TO_BE_REPLACED

(Column written for the Town Crier Nov. 25. Read part II)
There’s a new city council embarking on how to shape Toronto for the next four years.
Rather than sit on the sidelines and watch the new Mayor Rob Ford and 44 councillors make decisions that shape the city and your neighbourhood, get in the game.
Now’s the perfect time to push for something you are passionate about. We often complain to our loved ones, neighbours, colleagues or strangers about speeding cars on our street or sketchy characters hanging out in a nearby parking lot.
It’s easier than you think to voice your concerns and make a positive difference.
Keep in mind Mayor Ford was elected overwhelmingly in the suburbs, so he may focus more on these voters.
“Rob Ford will cater to his suburban base, so voices from the suburbs will be more powerful,” said Midtown Councillor Joe Mihevc.
That doesn’t mean Ford will ignore Midtown, especially as he campaigned on better customer service.
Midtowner Adam Chaleff-Freudenthaler is no stranger to political action. He started as a teenager pushing for better education and community safety.
“It starts by deciding what you want changed and sharing it with friends, neighbours and family and people you have never met,” he said. “Get a critical mass together.” END_OF_DOCUMENT_TOKEN_TO_BE_REPLACED 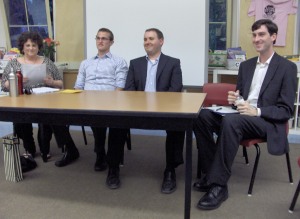 The race to replace outgoing St. Paul’s school trustee Josh Matlow is starting to heat up.
Matlow is running for city council leaving no incumbent in the school board Ward 11. So far three people have registered as candidates.
The latest to sign up is community volunteer Adam Chaleff-Freudenthaler.
“This is going to be a competitive race, so I want to make sure I can talk to as many people in St. Paul’s as I can,” said Chaleff-Freudenthaler. “The only way to do that is to register early.”
He is no stranger to the ward as he has lived here for over 20 years and volunteered for a decade.
If elected, he would like to help implement a broader approach to how schools are used.

END_OF_DOCUMENT_TOKEN_TO_BE_REPLACED

Who is running for Catholic and public school boards
City election attracting both new blood and veterans
By Kris Scheuer
(Updated Oct.25)

END_OF_DOCUMENT_TOKEN_TO_BE_REPLACED

Current school board rep Josh Matlow to run for council in 2010
No incumbent so at least 4 contenders consider run for seat
By Kris Scheuer
(Originally written Nov. 6 for Town Crier.)

A former school trustee, a young community activist, a pet food mogul and a politically-minded parent are hoping to get a passing grade from the electorate in 2010.
The quartet is musing about running to replace Josh Matlow on the Toronto District School Board. Matlow recently announced he’d be running for city council next year.
Here’s a look at four potential candidates Shelley Laskin, Adam Chaleff-Freudenthaler, Jim Walker and Heather Johnston. END_OF_DOCUMENT_TOKEN_TO_BE_REPLACED