Toronto a day in the life 14

Why people love Rob Ford, or think they do
Kris Scheuer

So mayor-elect Rob Ford was voted in. I talk politics all day at work as a reporter with my colleagues and other journalists. I interview politicians, residents, business people about the decisions at city hall. Then I talk with friends and loved ones more about this city, life, news, politics. I listen, read and watch politics. Ahh…
But I can always use more of a reality check into what people I don’t know think about politics and the election. I’d love to hear what you think: what are you excited about, confused about, fearful of with a new mayor Rob Ford about to take the helm?
Let me share with you some comments I overheard from strangers having conversations about Rob Ford’s policies post-election.

First up: Tuesday Oct. 26 the day after the election. It was raining. The streetcar took 15-20 minutes to arrive. It was standing room only with very little room for any more passengers when I overheard a woman ask the streetcar driver about Rob Ford’s policy to get rid of Toronto streetcars.
I could not hear well enough or get close enough to hear their 15-minute discussion on the likelihood of streetcars being shelved. But it was interesting to hear her raise this concern about what she heard regarding Rob Ford’s intentions.
During the mayoral campaign, Rob Ford spoke often about getting rid of some streetcars and replacing them with buses.
In his transit plan on page 2 he writes, ” We will improve traffic flow downtown by removing some streetcars. Streetcars on downtown arterial streets will replaced with clean buses that provide the same capacity on the same routes.  This will make the system safer and more accessible for all users.”
“It will also improve traffic flow,” Ford’s transit plan states.
“Zero net cost. Cost to purchase and operate new buses will be offset by savings from reducedpurchase of streetcars, sale of existing streetcars and reduced streetcar system maintenance.”
Does he plan to get rid of streetcars on downtown streets?
Rob Ford’s brother Doug (newly elected councillor in Etobicoke-North Ward 2) and a key campaign manager for Ford’s successful run for mayor has thrown some cold water on the idea of getting rid of streetcars.
“That was (a rumour from) our competition,” Doug Ford told the Toronto Star in an interview post-election. “Yes, we want to look at more effective ways of running transit, but by no means are we going to get a crane and start yanking up streetcars and throwing them in the lake.”
Rob Ford also spoke about scraping the approved Transit City plan in favour of proposal for extending the Sheppard subway line from Downsview over to the Scarborough RT and turning the Scarborough RT into a subway for a cost of $4 billion. Hear it for yourself by listening to Rob Ford’s 8:16 minute YouTube transit platform video on his website. 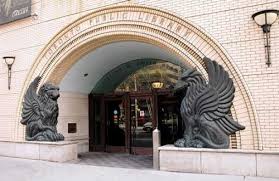 Here’s the second overheard conversation about Rob Ford and streetcars: Tonight I was the busy, downtown (also near College Street) gym I go to, when I heard two men discussing Rob Ford’s win.
“I hate the streetcars. They are so annoying,” the one man told his friend indicating he can’t wait for Ford to get rid of them.
“We are living in a bad economy. We need jobs. What did (Mayor David) Miller do? At least Rob Ford knows about business. He’s a businessman,” the first man continued.
The second guy was skeptical Rob Ford could keep all his promises and had a “wait and see attitude”.
The first guy then said, “And what about these libraries. They are on every corner and nobody’s in them. I see three, four people in them. They are a waste of money. They cost a lot of money.”
I have not heard Rob Ford talk about eliminating any libraries.
But let’s analyze the gym guy’s claims no one uses libraries and that they cost a lot.
According to the Toronto Public Library’s 2010 budget info,  computer use is up 11.5%, visits up 8.5%, in-library use of materials is up 6.3% and reservations for materials are up 9.9%.
What does that mean, how many people visit the library? According to the Toronto Public Library’s 2009 annual report here are some stats.
“In fact, with more than 17.5 million visits to our branches and more than 31 million items borrowed, 2009 was truly our busiest and best year ever,” stats the report. “Worldwide, the Toronto Public Library was breaking records as well, as the largest and busiest urban public library system in the world (serving populations over 2 million).”
And how much does it cost to run the Toronto Public Library’s 99 branches and bookmobiles (travelling libraries)?
The 2010 net operating budget was $167.09 million. Okay, that’s not pocket change but let’s keep it in perspective: this is less than 2 percent of the city’s overall $9.2 billion 2010 operating budget
What do you think?
Should we get rid of streetcars, libraries?
What do you want to see city council spend more and less on?