Ward 16 candidate Terry Mills may be giving Councillor Karen Stintz a political run for her money, but the incumbent still has the advantage in this race for Eglinton-Lawrence.
Mills, a professional planner with an architectural background is tapping into the key issue in this ward: development. Mills has the backing of Patrick Smyth, a member of the Avenue Road Eglinton Community Association. Smyth said he’s unimpressed with Stintz despite having supported her in 2003.
He’s specifically unhappy with Stintz’s decision to support two Riocan developments: A retirement residence at Avenue Road and Willowbank Boulevard, and Riocan’s plan to cover the open square at Yonge and Eglinton.
While Smyth claims Stintz hasn’t met a development she doesn’t like, her voting record shows otherwise.

Stintz has opposed a number of developments in the ward, including a plan for a 25-storey condo plus rezoning of land on Montgomery Avenue. With help from the city and residents, the plan was quashed. 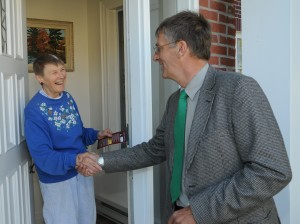 Smyth and Stintz have a history that dates back to 2003. Smyth was one of handful of residents who paid for an ad in the Town Crier in 2003 seeking a new councillor. The residents were looking to oust then-veteran councillor Anne Johnston over her support of the controversial Minto towers at Yonge and Eglinton.
Stintz responded to the ad and the residents, calling themselves the Coalition for Municipal Change, endorsed her.
While some say Stintz faces the same danger in the 2010 race because of development support, indications are she will be re-elected.
Michael Visser, who was a Coalition for Municipal Change member, said Stintz will face some problems but not enough to lose.
“She has dropped the ball on a couple of initiatives,” said Visser. “I think they are significant in their neigbourhoods but they aren’t huge blockbuster failures that will galvanize the whole ward.”
Visser does think she mishandled the open space issue at Yonge and Eglinton.
“To me, the purpose of the councillor is the ability to mediate in a way that allows a win-win, creative solution,” Visser said.
But Stintz said there’s been a balanced approach to development under her watch.
“People understand that (Yonge and Eglinton) wasn’t publicly-owned space but they may have differing opinions on how to develop it,” she said.
Ryerson political professor Mitch Kosny said while there may be several small developments piquing residents’ interest in this race, there’s not a singular project that will unite opposition.
“A lot of little fires don’t add up to a forest fire,” Kosny said. “You need one big issue to unseat someone. I’m gonna guess she’ll ride this one through and be re-elected,” he said, adding at the municipal level, name recognition still helps during elections.
Besides Mills and Stintz, two other candidates are running. Teacher and coach Roy Macdonald is running on a platform focused on crime, traffic and better city services. Firefighter Michael Coll’s priorities are parking issues and crime reduction.
All four candidates have been featured in the Town Crier’s print editions and on the paper’s website.