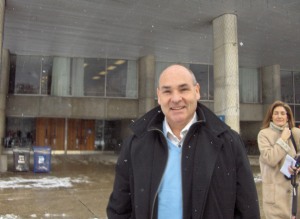 George Smitherman  has started his mayoral campaign in earnest by unveiling his expansive transportation plan.
At an May 27 editorial board meeting at the Town Crier, Smitherman gave insight into his platform, which also includes a detailed roadmap emphasizing core services, jobs and community development.
His 10-year transportation plan includes specifics on the current Transit City plan for light rapid transit, bike lanes and subways.
Smitherman fundamentally backs provincial agency Metrolinx’s funding of the four key Transit City projects but would like to see some changes to the current plan.
“I support the proposal that Metrolinx has made to do the Eglinton LRT from Kennedy station but it’s ridiculous to stop at Black Creek. That has to connect right over to Weston (Road),” he said.
As well, he supports pushing forward with the Sheppard LRT eastbound but past Morningside right into the University of Toronto and Centennial College campuses.
“Don’t do 90 percent and then stop,” he said. “Find the other 10 percent and get the job done.”
The Finch LRT had three sections, he said, he’s focused on the Finch West portion. His proposal is that it run from Finch subway to Highway 27 and then Humber College, Etobicoke General Hospital, Woodbine mall and the proposed Woodbine Live entertainment complex.
Smitherman rejects the Transit City plan to replace the Scarborough rapid transit with an LRT. Instead, he would replace the existing line by expanding the subway line eastbound from Kennedy station.
Additionally, he pledges to expand the Bloor-Danforth subway line westbound to Sherway Gardens mall, and connect the Sheppard subway westbound from Yonge Street over to Downsview Station.
Part of how he would pay for this is having the private sector design, build and finance the city-owned infrastructure. He’d also establish a city transit trust fund by placing revenues in it such as the gas taxes the provincial and federal governments send to Toronto.
“It is really focused on trying to get past the talk, into the stage of action,” he said. “In the course of the campaign I plan to lay out in quite a level of detail that … will serve as a roadmap for action.”
He doesn’t plan to build new bike lanes on roads at this time, but would focus on making existing ones more usable. He would build bike expressways along hydro corridors and along ravines.
Smitherman vows to reduce the vehicle registration tax although he didn’t get specific on the amount.
And he also floated the idea of making transit free for seniors between 10 a.m. and 2 p.m. during the week.

What do you think of Smitherman’s plan to expand LRT routes?