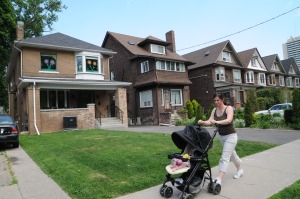 The home-based Teddy Bear Academy was allowed as of right before the interim bylaw froze new applications. Photo by Francis Crescia/Town Crier.

It’s going to be another year before the debate over home-based nursery schools in the High Park area is resolved.
On May 12, city council decided to extend the existing temporary ban on new such facilities opening on High Park Avenue between Glenlake Avenue and Dundas Street West.
In 2009, the Teddy Bear Academy opened up at a home at 167 High Park Ave.
A resulting protest from High Park Avenue Residents’ Association around traffic and safety concerns led to the temporary moratorium on new daycares to give the city time to study the issue.
The provincial Day Nurseries Act does have guidelines regarding standards such as drop off and pick-up zones, adequate space and the number of children allowed per daycare facility.
The facility that opened on High Park Avenue is licensed for 50 children, said John Bowen, who lives near the daycare.

He said he hasn’t noticed any problems with the operation because he believes only 15–20 kids are currently enrolled. Calls to the Teddy Bear Academy weren’t returned at press time.
“It’s the city’s obligation to do further consultation with residents,” said Bowen. “What occurred at 167 High Park Avenue could occur anywhere in the (old) city.”
In the old city of Toronto this type of business is allowed as of right, while that’s not the case in the other former municipalities, Bowen said.
That could soon change.
According to a city staff report, a draft of city-wide zoning bylaws, which will be coming to council for a vote in July, homeowners would no longer have the right to open a day nursery without further approvals.
Bowen said that the city is looking at a consultation process whereby the city would approve any new home-based daycares.
Councillor Gord Perks represents the adjacent Ward 14 next to where the interim bylaw is in affect. He voted against the temporary freeze on new home-based daycare applications.
Perks is in favour of consultation, he says, that city staff have studied daycare in homes and found no technical problems with noise, garbage or traffic.
“We have good evidence (daycares) don’t create problems and make life in the city better,” said Perks. “I believe amenities like daycares should be accommodated in neighbourhoods. That’s what makes great, thriving neighbourhoods.”

Are daycare operations out of people’s homes a good idea?