Mary Milne is a recipient and volunteer at The Stop. Photo courtesy of Second Harvest.

After paying her mortgage, Mary Milne doesn’t have enough money to feed herself for the month.
So she turns to The Stop Food Centre in the Davenport-Perth neighbourhood near her home.
“If I can pay my telephone bill each month I am lucky,” the senior says suddenly tearing up.
Each month, 67-year-old Milne gets a food basket for three days worth of meals and receives breakfasts and lunches a few days a week when she volunteers at The Stop. To get money for laundry and other monthly costs she sells her poster art, sketches and homemade jewelry.
Milne spoke to the Town Crier on April 15 while attending the silver anniversary of Second Harvest, which provides fresh produce to The Stop and 250 other GTA social agencies.
“I’ll be 68 this year and I’m barely surviving on old age security,” she told those gathered at the anniversary. “Second Harvest provides healthy food that I can’t afford to shop for.”

The North York-based charity collects and distributes 2.7-million kilograms of produce from supermarkets and restaurants that would otherwise be thrown out.
About 85 percent of it is fresh food and 15 percent is shelf produce such as canned goods that are still good but close to the expiry date.
“It is critical people have access to a wide variety of foods,” said Stephen Faul, executive director of Second Harvest. “The role we play is to augment what people get from food banks with fresh fruits, vegetables and protein.”
The Stop Food Centre relies on fresh food from Second Harvest but also grows food at community garden at Wychwood Barns. 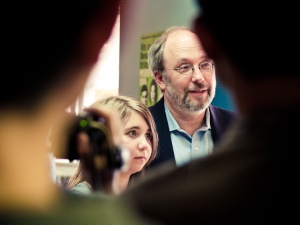 On April 6, The Stop launched a campaign called Do the Math challenging 10 prominent Torontonians, including St. Paul’s Councillor Joe Mihevc, his wife Rosalee and daughters Krista and Catherine, to live on a three-day food hamper for an entire week.
“If our experience is any teacher to us, you have to be very creative if you are poor,” said Mihevc who supplemented the rations by having some meals at a food bank.
“I’m tired. I have a slight headache. We are all feeling a bit snarly,” Mihevc said after four days on the food bank diet. “It helps us relate to people’s behaviour and whether the behaviour we see in some people is due to lack of food or nutritious food.”
Toronto’s Medical Officer of Health, Dr. David McKeown found his experience participating in The Stop’s campaign to be quite difficult.
“I lost five pounds,” he said after completing the week-long challenge. “I was hungry. I had headaches, low energy and I was tired.
That’s a challenge for people holding down two jobs, raising a family or looking for work.”
The solution isn’t lowering the cost of healthy food, which is relatively affordable, he said, but in raising people’s income.
“It’s increasing social assistance, minimum wage or adding housing or childcare at affordable rates,” he said.
Every year each medical officer of health in Ontario is asked to calculate the costs of a nutritious food basket and forward the info to the province so it can set welfare rates to include healthy foods.
Yet, according to McKeown’s calculations, for a family of four on welfare there’s a gap of $150 between what it costs to pay for Toronto housing and the nutritious food basket. For individuals living on $590 from social assistance there’s a shortfall of $400 between the actual costs for housing and healthy food and what the province provides in social assistance rates, he said.
That’s the point of Do the Math campaign, said Nick Saul, executive director of The Stop Community Food Centre.
“The province needs to raise social assistance so people can afford to live in the city they live in, well,” he said. “We are asking that they immediately put in a $100 healthy diet supplement as a down payment towards adequacy.”
As part of its recent budget, the province announced it was cancelling the special diet allowance of up to $250 for people on welfare.
This program was designed to aid people with specific medical conditions buy food that would help improve their health. The province plans to replace the allowance with a yet to be announced nutritional supplement. 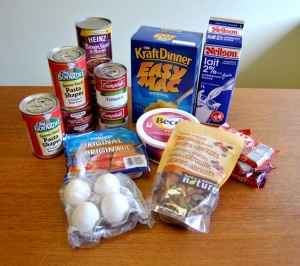 Overall, food bank use is on the rise, said Gail Nyberg, executive director of the Daily Bread Food Bank.
In 2009, there were over a million visits to food banks in the GTA representing an eight percent increase over 2008.
“There has been a change in terms of more bank users who recently became unemployed,” said Nyberg. “They can usually cope on (employment insurance) but the moment EI runs out, or if they don’t qualify for EI then they need help.”
Hard economic times also hit the food banks. Donations to Daily Bread’s spring drive were down by almost half before a surge in assistance helped it to reach the goal of $250,000 and over 109,000 kilograms of food.
Teen Sarah Siddiqi helped raise $400 at Milne Valley Middle School in 2009 and collected $245 by herself this year to help Second Harvest for which she was honoured April 15 by the group.  Siddiqi has been to Pakistan with her family where she saw kids in real poverty and this left a lasting impression on the 14-year-old.
“There were kids going through the trash (in Pakistan) for something to eat or sell,” said Siddiqi.  “You feel so privileged to live here that you want to do something.”
She didn’t feel a wealthy country like Canada should have children without enough to eat and yet, according the Daily Bread Food Bank, 35 percent of food bank user are kids.