Mary Milne is a recipient and volunteer at The Stop. Photo courtesy of Second Harvest.

After paying her mortgage, Mary Milne doesn’t have enough money to feed herself for the month.
So she turns to The Stop Food Centre in the Davenport-Perth neighbourhood near her home.
“If I can pay my telephone bill each month I am lucky,” the senior says suddenly tearing up.
Each month, 67-year-old Milne gets a food basket for three days worth of meals and receives breakfasts and lunches a few days a week when she volunteers at The Stop. To get money for laundry and other monthly costs she sells her poster art, sketches and homemade jewelry.
Milne spoke to the Town Crier on April 15 while attending the silver anniversary of Second Harvest, which provides fresh produce to The Stop and 250 other GTA social agencies.
“I’ll be 68 this year and I’m barely surviving on old age security,” she told those gathered at the anniversary. “Second Harvest provides healthy food that I can’t afford to shop for.” END_OF_DOCUMENT_TOKEN_TO_BE_REPLACED

Briar Hill parent Carmen Moscarello isn’t ready to say goodbye to her child’s elementary school.
But if a report on the future of three schools in the Dufferin and Eglinton area is adopted by the Toronto school board in June, she may have to.
An Accommodation Review Committee report is recommending closing Briar Hill, expanding nearby Fairbank Middle School from JK to grade 8, and keeping West Prep Junior School as JK to grade 6.
Briar Hill is facing closure because of declining enrollment at the JK to grade 5 school. The 1927-built facility has a capacity for 265 students but only about 147 kids are enrolled there.
An attached minority report by committee members and Briar Hill parents Julie McFayden and Paul Dover doesn’t support closing the school.
Board staff will make its own recommendations and the issue will go for a board vote at the end of June, but in the meantime, parents like Moscarello are fuming at the mere suggestion of closure.

END_OF_DOCUMENT_TOKEN_TO_BE_REPLACED

Ron Singer is running for councillor in Ward 15 on a platform of crime reduction, safety and traffic — especially as it relates to the new revitalization plan for Lawrence Heights.
“They will bring in 10,000 more cars (as) they want to bring in 8-9,000 more (residential) units,” said Singer, of the Toronto Community Housing plan for the under-served neighbourhood.
“With more cars, the main intersection will be blocked and people will be racing down (side) streets.”
Drivers may turn down residential side streets to avoid congested main roads, he said, which could increase safety risks for kids.
“I am fighting how this will be set up. I don’t want to see a small kid hit by a car just to say, ‘I told you so,’” he said. “Cars and kids don’t mix well.” END_OF_DOCUMENT_TOKEN_TO_BE_REPLACED 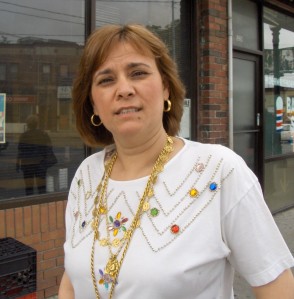 When Rosina Bonavota was helping run the family business Bonamico Cafe, everyone from teenagers to grandmothers would chat about their concerns.
Lending an ear, Bonavota became known as the neighbourhood problem-solver in the Oakwood and Vaughan community she’s lived in since age seven.
Now as an Eglinton-Lawrence ward 15 candidate, Bonavota wants to tackle issues from within city hall.
The school bus driver has lived in the area since she was seven and says she has keen knowledge of local issues. One of the persistent problems in the area is crime, she says. It was a personal tragedy that hit very close to home last November.
“My friend’s son died six months ago, shot by a stray bullet. He was studying to be a police officer,” said Bonavota, who has two grown sons of her own.
She’s referring to the murder of 18-year-old Robert Flagiello, who was fatally wounded as he stood on Vaughan Road. He was not the intended victim.

END_OF_DOCUMENT_TOKEN_TO_BE_REPLACED 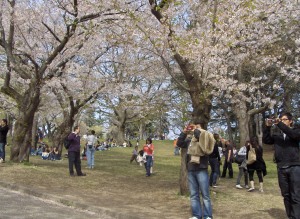 I couldn’t resist visiting some of the 200 flowering Cherry Blossom trees at High Park on Saturday, April 24. I was there with my sister, niece, mom and brother. We weren’t the only ones. Hoards of couples, families and individuals armed with cameras took photos of the lovely sight.
Most of the trees I saw are on the hill above  Grenadier Pond and below/beside Grenadier Cafe. 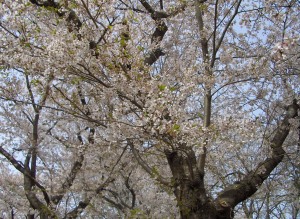 Toronto a day in the life 12

The kite my dad bought me April 24. It will look more impressive in the sky. Where should I fly it?

I can’t remember flying a kite as a child in T.O in the ’70s and I don’t see much kite flying in the city now.
So it was sheer joy as I watched four young children and one man, perhaps a father of one of them, flying kites on a windy afternoon Saturday April 10.
The spot was Cedarvale park where Humewood Dr and Heathdale Rd meet, off Vaughan Rd north of St. Clair Ave W.
This section of the park has a bowl like valley free of trees and seemed to be a perfect spot for the group to run to catch the wind in their colourful kites and then lie back on the grassy hill and watch them dance in the sky.
The scene captured me. Later I mentioned it to a friend who told me as a child growing up in Barbados he often built and flew kites. He’s promised to build one we can fly. I can’t wait.
A week ago, I asked my dad where to get supplies to build a kite. Then an hour after posting this story on April 24, I went to visit my father and he surprised me with this Spiderman kite. Sweet, right?
Perhaps there are better places to fly kites than Cedarvale park? Let me know…

END_OF_DOCUMENT_TOKEN_TO_BE_REPLACED

Posted in Toronto a day in the life

How many new politicians will be at city hall?
At least seven new faces, but it will be more
By Kris Scheuer

Kyle Rae's not seeking re-election so a new councillor in Ward 27 is a sure thing.

Take a look at Toronto city council’s today because it will look different after the election.
At least seven councillors won’t be representing their wards anymore. Plus Mayor David Miller won’t be back. That’s guaranteed. But the turnover will be higher than that.
It won’t be the first time and in fact it could be less or about the same amount of turnover as in 2003 and ’06.
The current 45-seat council will be shaken up in 2010: I have all the details on who’s running and who isn’t here, which is updated regularly.
So far we’ll see a minimum turnover in seven council wards. END_OF_DOCUMENT_TOKEN_TO_BE_REPLACED

John Morrison built up business of volleyball at Ashbridges Bay over 14 yrs
Accomplishments being ignored and was shut out of new contract says Morrison
He owed city money at end of last contract and didn’t bid on new deal
By Kris Scheuer
(Written April 8 for Town Crier.)

John Morrison’s dream of continuing his beach volleyball partnership with the city was spiked when council awarded a new contract to another major player.
The Ontario Volleyball Assocation was the only bidder for the five-year contract to run beach volleyball at Ashbridges Bay and on March 31 the city sealed the new deal.
Morrison’s company TESSC Inc., better known as Not So Pro Sports, has been running beach volleyball at the site with various city permits and contracts for 14 years. His previous city contract expired last September and he has yet to settle up for $327,875 he owes.
But for Morrison that’s where the story begins not where it ends.
“They say pay up your bill and thanks for the last 14 years — don’t let the door hit you on the way out,” said Morrison. END_OF_DOCUMENT_TOKEN_TO_BE_REPLACED

Posted in Toronto parks and recreation

Candidate Dewdney wants constituents to access him 24/7
Interaction with residents key to being a good Toronto-Danforth rep
By Kris Scheuer
(Written April 8 for Town Crier.)

Mark Dewdney promises to be accessible to constituents if voted in as the next Toronto-Danforth Ward 30 rep.
And starting now as a candidate he’s giving out his home number.
Dewdney’s philosophy about being available to help around the clock is personal to him and stems from the fact others were there for him in his own life.
Born and raised in Cambridge and Kitchener, he was adopted at birth, lived in various group homes and credits others for making a difference in his life. Now he wants to give back and get voters more involved so city hall works for them.
“Something for me to guard against is complacency,” said Dewdney, who’s lived in East York most of his life. “You better give out your home number and have dinner in the ward with your family.”

END_OF_DOCUMENT_TOKEN_TO_BE_REPLACED

New condo tower to be built at One Bloor East. Courtesy of Great Gulf Group.

One Bloor will rise again.
Great Gulf Group of Companies is building a 65-storey condo and retail project on the southeast corner of Yonge and Bloor streets on the same spot of the now defunct, much-hyped 80-storey tower by Bazis International.
All previous condo buyers got their money back from Bazis and will receive first dibs on the new condo project.
Corrado Di Rosa who bought into the previous project was happy to re-invest in Great Gulf’s condo tower.
“I’m on the 34th floor,” Di Rosa said March 31 a few days after purchasing.
He is confident this project will move forward.
“Because it was Great Gulf and I’m in the industry, I wasn’t hesitant (to buy) at all. I know their reputation,” said Di Rosa. END_OF_DOCUMENT_TOKEN_TO_BE_REPLACED