The race to replace outgoing city councillor Kyle Rae is the busiest in the city.
With no incumbent, Toronto Centre-Rosedale Ward 27 has attracted 10 registered candidates so far. Here are mini-profiles of three of the people running in this ward: Joel Dick, Chris Tindal and Susan Gapka.

Candidate Joel Dick says living in the ward for over a decade has helped him gain knowledge about local concerns.
“It’s a remarkably diverse ward,” says the litigation lawyer, who volunteers as a referee with youth hockey.
One issue that needs attention is bringing more economic development business opportunities to the George Street between Carlton Street and Queen Street East, he said.
He also favours the plan to redevelop Jarvis Street by reducing it from five traffic lanes to four in order to accommodate bike lanes.
“I hope to move the discussion beyond the bike versus the car,” said Dick, who has done casework for a student run legal clinic as well as pro bono work for the Child Advocacy Project.
He also endorses Toronto’s Transit City plan for eight new light rail transit lines including ones along Don Mills Road and Finch Avenue.
Dick said his degrees in political science, international relations and peace studies will help him build consensus on issues at city hall.
“At the end of the day, people can reach common ground when you work hard enough at it,” said Dick, who was a school trustee candidate in 2006 municipal race.

Candidate Chris Tindal is running to make a difference.
“I think the decisions a councillor makes over the next four years will be with us for a lifetime,” said the 28-year old. “We are building the city for the next generation.”
He said a large part of the job for the local rep is focused on development in this dense downtown Ward 27. He wants to focus on having new office space in the city built closer to transit.
“I think everyone wants to get to and from work in a convenient way,” said Tindal who has lived in the ward for a decade.
He said he is a member of Auto Share, commutes by bike in the summer, uses transit regularly and is also a pedestrian. He’d like to see people get away from the bike vs. car rhetoric.
“A lot of people in this ward drive but would rather not if given the option,” said Tindal. “We have to get people out of their cars with a carrot not a stick.”
If the city implemented its entire bike plan rather than a few cycling lanes here or there, it would encourage more people to commute by bike rather than car, he said.
Tindal was the federal Green Party candidate in Toronto Centre twice, so he has already met many of the people in the ward during those campaigns.
Now hopes to win the race through the sweat of his brow.
“I will work hard to make sure every single resident in this ward gets a chance to meet me and tell me their hopes and dreams,” said Tindal. 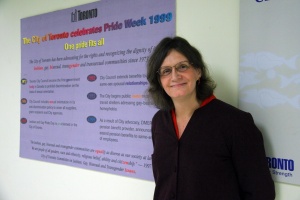 Candidate Susan Gapka is no stranger to this ward. She not only lives here, but also ran as a council candidate in Ward 27 in the 2006 race.
She has been active in the ward as an advocate for social housing and for the lesbian, gay, bisexual and transgender community.
She pays market rent in a Toronto Community Housing building. She was a tenant rep fighting for money to fix Toronto Community Housing’s $300 million capital repair backlog.
And she along with others have seen some success including the city spending $75 million towards that social housing repair backlog, the province kicking in $36 million and some cash from the feds through economic stimulus spending.
“I am feeling confident to have helped,” said 53-year-old Gapka. “There’s much more to do, but we have found a formula to something done.”
She co-founded Rainbow Health Network and Trans Health Lobby Group, which has advocated for public funding of sex reassignment surgery. The groups she works with were successful in getting the surgery re-listed as a government funded, medically necessary procedure.
“If we look at my contributions to the community and political success, just think about what I could do if I was elected as a city councillor, had a budget, staff and votes,” said Gapka, a self-identified transgendered woman.
If elected, Gapka will be the first transgendered woman on city council.
The seven other candidates registered as of Feb. 24 are: Enza Anderson, Ken Chan, Perry Missal, Ella Rebanks, Rob Salerno, Paul Spence and Simon Wookey. The Town Crier plans to profile all candidates before the Oct. 25 election.