Former Leaside councillor Jane Pitfield is running in Toronto Danforth’s Ward 29 and I wrote about her on Jan. 6 the day current rep Case Ootes announced he would not seek re-election. But she’s not the only one seeking this seat.
Now meet a trio of candidates running here: Chris Caldwell, John Richardson and Mike Restivo. Scroll down to read each profile.

Chris Caldwell registered as a candidate on Jan. 4 before Ootes made a decision not to run.
I looked forward to running against him,” Caldwell said from his home 180 metres outside Ward 29. “There’s a lot I didn’t agree with (Ootes) on but it runs deeper than that. It is how people are engaged in the planning process. They want to see their desires reflected in policy.”
He wants the community to be involved in any development planning application from beginning to end.
“We make better decisions with more information,” said the 41-year-old business analyst and consultant with a background in urban planning.Caldwell said it’s not good enough to hold a public meeting and have people line up to ask questions.
He also spoke about wanting to reform city hall to bring integrity, ideas and passion for progress while striking a balance for social, environmental and financial progress.
Caldwell wants to encourage residents to be more engaged with local and city issues.
“A lot of my priorities will be set by the community,” said Caldwell. “To create change, you need to do the work.”

Candidate John Richardson also registered early so he can knock on as many doors as possible, he said in an interview at a city hall café.
The fact there is no incumbent makes it a race, he said.
One of the key issues for him is keeping property taxes low and that means looking at the cost of city services and how they are funded.
“Put garbage (service) out for bids, not necessarily the lowest bid will get the contract. There’s a difference between the lowest bid and best bid,” said Richardson.
On the transit issue he said, “The TTC is worth investing in. The issue is where the money will come from. The TTC needs to look at all possibilities,” he added.
One suggestion he had is leasing more space to businesses at TTC stations to raise revenue, said Richardson, a part-time lawyer who also runs seminars for university students preparing for their next stage in life.
With no incumbent Richardson sees the ward as up for grabs and says that voters should choose a candidate they have confidence will show good judgment when voting on city and local policy.
“No one knows for sure what issues will arise over the next 4-8 years.” 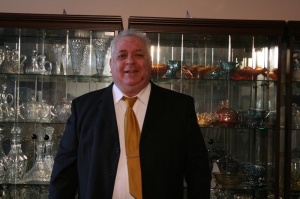 Candidate Mike Restivo has lived in the ward his whole life. The fact Ootes is not running was the last push he needed to register, said the retired 59-year-old.
“People want lower property taxes and more jobs,” said Restivo, who used to work as electronic technician and designed his own computer programs.
He said the TTC needs more revenue to be profitable but said asking the province for money is not the answer.
“No one should expect the province to bailout the City of Toronto,” he said. “We have to carry our own weight.
“TTC fares will have to be double,” he said. “I am not married to raising (TTC) rates. It will cause some earthquake rumblings. (But) it’s pay if you use it.”
He said transit should not be subsidized by government and is still fairly cheap compared to driving instead which can cost $30-50 a day to park a vehicle downtown, he said.
He also floated the idea of road tolls.
“The city will get valuable money through road tolls and this will keep property taxes down,” said Restivo. “I suggested these as options that should be seriously considered.”
The election is Oct. 25 so more candidates may step forward and profiles will be updated as the campaign progresses.