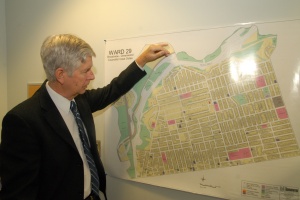 With thoughts turned to a possible career in academia, Case Ootes is foregoing another run at council after two decades representing Toronto-Danforth’s ward 29.
On Jan. 6, Ootes announced his retirement from municipal politics, saying he will not be seeking re-election this year.
The father of four sat down with the Town Crier in his East York Civic Centre constituency office Jan. 13 to discuss how the area he’s represented has changed, life after city hall and a possible new career as a professor.
“I decided some time ago – a year ago,” he said of his decision not to run again. “I have been an elected official for almost 22 years. It has been rewarding, but I want to move on.”
He spoke fondly of his political career.
“Nothing can compare to being an elected representative at the municipal level, especially in the City of Toronto where you have all sorts of challenges to address and you can make a difference in the lives of people.”
Ootes was re-elected seven times including in 2006 in a close race he won by only 20 votes. Before he was elected, he worked at Imperial Oil as manager of accounting services and national credit manager.
When Ootes, 68, was first elected in 1988, East York was a borough and was a decade away from amalgamating with Toronto.
He said there are more young families now, and a more diverse population than 20 years ago.
“East York is a very stable community, said Ootes, a former deputy mayor. “There are areas where there are problems with drug dealing, but on the whole, it’s very stable.
“There’s not a lot of (major) development.”
He noted the Danforth has changed in that the thoroughfare has grown to be more of a tourist destination.
Former Leaside councillor Jane Pitfield has registered to run in his Ward 29 and so has Chris Caldwell.
Ootes advice to his eventual successor, “Pay attention to your constituency’s needs and you will be rewarded at the polls. Fail to do that and people will boot you out. And you need to have a citywide perspective on large city needs.”
One of the perks retirement from politics will afford Ootes is more time to travel with his wife Pat, whom he married in 1964.
They have two sons and a daughter in the city and another married son in Austin, Texas.
And a new career at Seneca College is also a possibility.
Ootes has been associated with the school for the past four years as an executive in residence with the Centre for Financial Services.
“I have done some mentoring with students and I may want to pursue some opportunities with the college whether it’s teaching or some other role.”
Ootes emigrated from Holland with his parents and younger brother when he was eleven. They arrived in Canada at Pier 21 in Halifax and moved to the Ottawa Valley where his dad worked as miner and the family grew up in a one-room log cabin. His brother, Jake Ootes, was an elected official in the Northwest Territories Legislation in the 1990s.